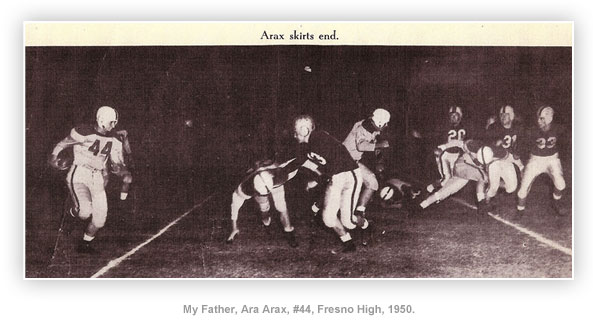 Once before, I tried to write about high school football. It was my younger brother Donny’s first season coaching at Kerman High, and as I followed his Lions east and west across the valley, I found myself strangely drawn to the lights rising in the distance out of vineyards and alfalfa fields. Sanger vs. Reedley, Selma vs. Kingsburg, Parlier vs. Fowler.

I knew how those Friday Nights shaped the lives of young men and how they brought together communities with little else to hold on to. I knew that Texas had nothing on our valley, at least not when you headed in the direction of Rolinda and stepped into the dim corners of Kaufman Field and took a whiff of sweet September: cut hay and cow dung and raisins baking in the rows.

Yet the right words eluded me, or rather the wrong words, too maudlin, kept getting in the way. And so I never wrote about the deeper meaning of high school football even as my brother dubbed me “the oldest ball boy in the valley” and I shadowed his coaching path from Kerman to Reedley to Fresno, back to our alma mater, Bullard High.

My brother is the reason I believe in nature over nurture. He was seven years old when our father, Ara, was killed, but he has his same walk, same gestures, same vein bulging out of his throat when he gets excited. Like our father, he gets excited too easily. I knew God intended Dad to be a coach—not a grape grower, not a grocer, not a bar owner—the first time I watched him giving instructions to my Little League teammates. He was patient in a way he could never be with me.

Yet nature works funny angles, intentions that fail to stick to fathers only to land again with sons. I imagine my brother is the coach my father could have been, would have been, had he not given up that football scholarship at USC and returned home to the farm.

My brother and I have never talked about it, but I know he coaches with an eye always to our father. Maybe this is why he puts up with me, second Dad, standing next to him during games. I have not always minded my bounds. I have yelled at refs and shouted at opposing coaches. I have exhorted my brother, during endless seasons of fealty to the Wing T offense, to call a pass play now and then. But in all those years, only once did he lose patience with me.

At Chukchansi Stadium a few years back, we were on our own 35-yard line, and it was fourth down. Suddenly he got that look—gambler’s gullible—in his eye.

“Last time I checked,” he snapped, “you were the writer, and I was the football coach.”

So there we were last Friday night in the rain of McLane Stadium, my brother with his headsets and me with my towels. For four quarters, I tried to keep my mouth shut as I dried three pigskins rotated into the game by a team of younger ball boys, my 11-year-old, Jake, among them.

We all felt the weight. Back before my brother was a star linemen and linebacker in the early 1980s, before I was a quarterback in the mid 1970s, all the way back to Bullard’s beginning in 1954, the football Knights, the “Fighting Knights” as my brother renamed them, had never won a valley championship.

Remarkably, I did not have to conjure up the past. Many of the faces were right there on the sidelines—players from each of my brother’s ten years at Bullard, players and coaches from his era and my era and those before. Bullard’s entourage, the Bee sports writer, tongue in cheek, called us. This is what my brother had built. All his 70-hour work weeks, all his Hall of Fame dinners honoring past legends, all his talk about the families who chose not to flee to the Clovis schools but had stuck to the hardpan of northwest Fresno. Bullard Pride.

As the clock counted down and the valley title became ours, a perfect 13-0 season, I gave my brother a kiss on the cheek. Then I clutched my two sons, Joe, a past Knight, and Jake, a future Knight, and my sister, Michelle, the school board member who had been named “honorary team captain” for all her work to improve the Bullard community.

I looked down at my hands, they were pink from the leather of rubbing so many pigskins dry, and then at the mass of family, friends, players and fans huddled in the mud of midfield, and then at my brother’s wife, Kristine, who had struggled 15 years to give him a first child, a miracle baby named Ara. It was one of those moments that as they are forming in your eyes, you whisper to yourself, “This is a memory.” Indelible, fixed, forever.