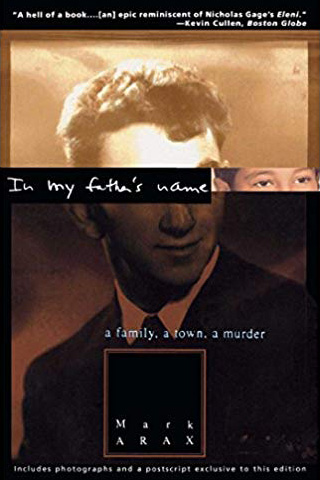 In My Father’s Name

A Family, a Town, a Murder

The author recounts the events that transpired twenty years after his father's unsolved murder, during which he returned to Fresno under an assumed name and uncovered the startling disclosure that preceded his father's death. Reprint. NYT".

The true story of the author’s return to his Central California hometown to investigate his father’s unsolved 1972 murder. Pocket Books. Now in paperback. “Almost every American town harbors some brutal secret, but few produce writers like Mark Arax with both the courage and artistic talent needed to coax the story out and shape it into fine literature,” says Peter H. King of the Los Angeles Times. “Of course, Arax had an extra incentive: the footsteps he followed ran straight through his own family, straight through his own heart.”

On the night of February 22, 1996, at St. Paul Armenian Church, there was a gathering. The gathering was for Mark Arax and the signing of his book, In My Father’s Name a Family, a Town, a Murder. When you walked into the hall there was an overwhelming feeling. There was warmth, community, and most of all pride. It was a time to gather and recognize one of our own who had succeeded in accomplishing his dream. Also it was a homecoming for Arax from a long journey.

All around me, I only heard comments of how well the book was written or how much someone had enjoyed reading the book. You can imagine how happy we were when Arax himself read portions of his book to the audience. Remembering that the book is based on his family history, and not a fictional account, this is the story of the struggles and tragedies that his family has faced throughout their lives. He began with his grandfather’s journey to America and read portions up to his father’s death in Fresno. I was drawn in by his narrative and emotionally bound by the events one family went through.

There were parts that Mark Arax read that made us laugh and parts that were deeply sad. The event was not simply to gather and listen to a reading or seek an author’s signature. It was an evening of remembrance for many. Numerous people were friends and family who associated with the reading because they were there. Certainly the reading stirred up memories that were long forgotten. Both joyous and melancholy, reflections of the not so distant past left its impression on all. It is a profound moment when so many can be touched so deeply at one time. Mark Arax’s book and presence defined that moment.

Although I didn’t know him personally, I was truly affected by his experience and the tragedy that directed his personal journey. Without hesitation I recommend In My Father’s Name a Family, a Town, a Murder, not only as a history of Fresno but as a gripping account of the search for truth.

Praise for In My Father’s Name

“On January 2, 1972, two men walked into a Fresno, California, nightclub and shot the owner, Ara Arax, to death. Although it was one of the most sensational murders ever to take place in the area, the crime was never solved. In this riveting account of the event, Arax’s son Mark, who was 15 years old at the time and is now an investigative reporter at the Los Angeles Times, attempts (20 years later) to solve the crime that destroyed his childhood. As he painstakingly interviews witnesses, regulars at the bar, friends, family members, and members of the local police force, he rekindles memories of his father that make the quest to find the killers almost too painful to bear. Arax persists, however, and eventually he is able to pin down the killers, finding that his father (who at the time of his death had been desperately seeking an audience with local law enforcement officials) was silenced by the local organized crime network. This narrative of his father’s life and death (and his own pervasive sorrow and longing) is both electrifying in its intensity and heartbreaking in its raw emotion.”

“A vivid memorial to the incidental victims of a homicide. It reminds us how brutally an unsolved mystery can deform an entire family and change its fate.”

“Extravagant in its detail … Arax has reached far beyond the murder of his father, Ara, to deliver a complex parable of family, heritage, revenge and civic corruption.”

“Arax is charged, emotional, driven … in the course of In My Father’s Name, Mark Arax does more than vindicate his father. He also makes peace, and, in doing so, liberates himself.”