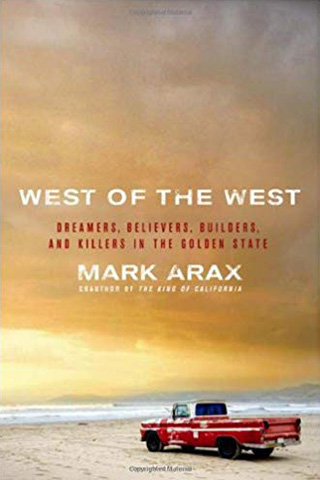 West of the West

Dreamers, Believers, Builders, And Killers In The Golden State

Teddy Roosevelt once exclaimed, "When I am in California, I am not in the West. I am west of the West," and in this book, Mark Arax spends four years travelling up and down the Golden State to explore its singular place in the world. This is California beyond the clichés. This is California as only a native son, deep in the dust, could draw it.

Teddy Roosevelt once exclaimed, “When I am in California, I am not in the West. I am west of the West,” and in this book, Mark Arax spends four years travelling up and down the Golden State to explore its singular place in the world. This is California beyond the clichés. This is California as only a native son, deep in the dust, could draw it. Compelling, lyrical and ominous, his collection finds a different drama rising out of each confounding landscape. Arax combines journalism, essay and memoir to capture social upheaval as well as the sense of being rooted in a community. Piece by piece, the stories become a whole, a stunning panorama of California, and America, in a new century.

Praise for West of the West

“By turns lucid, harrowing, and comical, this collection of dispatches paints a darkly impressionistic portrait of modern California. A journalist and native son, Arax puts paid to vestigial West Coast clichés and replaces them with ominous realities and discontents encountered during four years of intrastate travel. Migrants, exiles, dreamers, schemers, murderers, hippies, fundamentalists, conspiracists, environmentalists—all share space in these pages and in that vast Golden State. The possibility of crazy-quilt discursion looms high, but Arax calmly sews the diverse stories and dramatic studies into coherence and poignancy. The effortless mix here—memoir and reportage, psychography and geography—coolly achieves the author’s aim: ‘to find the truth and the lie of the California myth.’”

“These swift, penetrating essays from former Los Angeles Times writer Arax (In My Father’s Name) take the measure of  contemporary California with a sure and supple hand, consciously but deservedly taking its place alongside Didion’s and Saroyan’s great social portraits. Expect the unexpected from Arax’s reports up and
down the state: on the last of the Okies, the latest migrants from Mexico, the treesitters of Berkeley, Bay Area conspiracy theorists, an Armenian chicken giant’s infamous fall or the mammoth marijuana economy of Humboldt County, among much else. For Arax, a third-generation Californian of Armenian heritage who spent years covering the Central Valley as an investigative reporter, the state’s outré reputation and self-representation are a complex dance of myth and memory that includes his own family lore and personal history. It’s partly this personal connection, running subtly but consistently throughout, that pushes the collection past mere reportage to a high literary enterprise that beautifully integrates the private and idiosyncratic with the sweep of great historical forces.”
– Publisher’s Weekly. Starred Review

“The many strengths of West of the West include solid reporting, taut writing and an author who has a firm grasp on his subject. Arax’s California isn’t about beaches or Hollywood or Disneyland. It’s about a mix of real people who live there, mostly not in the limelight. You can trust that when Arax writes about this subject, he knows what he’s talking about.”

“Pick up a copy of West of the West and absorb it. It’s a delight to read.”

“Mark Arax is a great reporter. He knows where the action is, and the remarkable level of detail he captures tells us he’s as tenacious and unrelenting as the most hard-boiled noir detective. . . . Arax successfully evades the tropes about California being the land of either dreams or nightmares. Instead, his essays paint an impressionistic landscape of a land of frustration.”

“In West of the West, Arax demonstrates the same uncanny ability to get closer to his subjects than you would ever think possible. These are compelling, sometimes heart-rending, eminently readable stories.”
—Contra Costa Times

“Native son Mark Arax travels the state side-to-side, end-to-end to gather its stories, writing about the ‘real’ California lost in the gloss of tourism teasers.”

“Arax is drawn to stories of mysterious loss, and he tells them so beautifully that his writing rises above the often tragic subject matter, lending mythic value to little-known lives.”

“West of the West is immediate in the best ways, sometimes intemperate, but always interesting.”
— Minneapolis StarTribune

“Wherever he goes, Arax takes a remarkably crafted personal prose vision. His essays are gorgeously written, poignant and funny.”

“Mark Arax has achieved something truly wonderful. He shows us a California we don’t know or haven’t yet heard about: Post 9/11 racism and craziness in the Central Valley; dunderhead FBI agents prowling the land; the plight of immigrants as it really pans out; marijuana moguls dealing in stacks of cash that stinks of weed; the disgraceful decline of the once-great LA Times—all of it set in the larger frame of a generation of Armenian immigrants tied to the old country, in love with the new country, struggling to discover the meaning of life with all their might.”
—Carolyn See, author of Making a Literary Life

“A lucid, warts-and-all portrait of California by a native son. . . . [W]orthy of a place alongside the works of . . . Carey McWilliams and even Joan Didion.”

“West of the West is a dreamscape as much as a landscape—and heart-stirring in its style and acute perception. It could be titled ‘Why We Live Here Anyway’—I exhort you to read this book.”
—James Ellroy, author of The Black Dahlia and the forthcoming Blood’s a Rover

“Arax dug deep into the dirt of California, and he didn’t come away with his hands clean.”
—San Diego Union Tribune